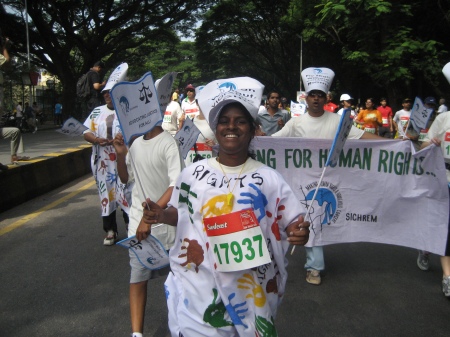 Like last year, SICHREM is a Participating Charity in the run this year – click here to support SICHREM online.

However, there are several ways that you can support SICHREM.

How can I support SICHREM?

If you have any further questions about how you can support SICHREM in this run, please contact Satish, Fundraising Coordinator at SICHREM, at 9739797287 / satishj@sichrem.org.

Advocate Siji Malayil and Advocate Mercy, two of SICHREM’s part-time advocates, have been involved in helping the family of a victim of custodial death obtain justice.  This case was among the cases of torture taken up by the “National Project for Preventing Torture in India” initiated by People’s Watch.

On 12 August 2006, the husband of the complainant, Mrs Krishnamurthy, was taken to the BEML Police Station, Kolar District, after an earlier altercation with the police.  Whilst in police custody, Mrs Krishnamurthy’s husband was assaulted and subsequently died from his injuries.

The victim’s death was witnessed by two friends.  However, these witnesses were personally threatened by the Sub Inspector of Police that if they revealed this incident to anyone, they would be framed under false charges.

The complainant made several complaints to higher officials in different authorities to initiate action against the police but with no success.

A Private Complaint by SICHREM, on behalf of the complainant, was filed against the four accused members of the BEML Police Station.

The matter was referred to the Judicial Magistrate of First Class, K.G.F., Kolar Court (the Court) who ordered the Circle Inspector of Police, Orgum Circle (CPI) to investigate the case.

The CPI allegedly investigated the matter and filed a First Information Report and filed a False B (Bogus) report before the Court i.e. saying that this was not a case of custodial torture and death.

The Court found that the CPI had not done a proper investigation.  The Court took into record the sworn statement of the complainant, deposed the eyewitnesses and summonsed the accused to court.

On 25 February 2010, the Court registered a criminal case of murder under section 302 of the Indian Penal Code against the accused persons.

The accused persons must appear before the Court on 26 April 2010. 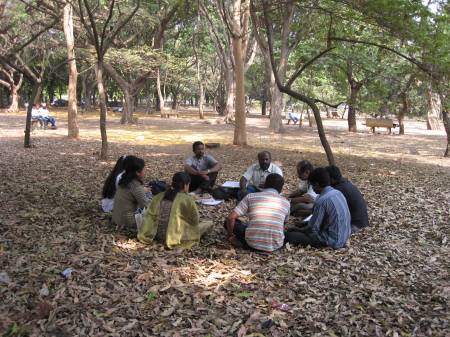 This was Saturday’s RTI clinic in Cubbon Park (directly opposite the Press Club entrance).  It’s an informal opportunity for anyone with any specific questions about the RTI Act to come by and ask individuals experienced with dealing with the Act for advice.

The RTI clinic meets on the last Saturday of each month, from 2pm – 4pm. The next clinic is on Saturday 24 April.  Please contact Manohar if you have any questions about these clinics. 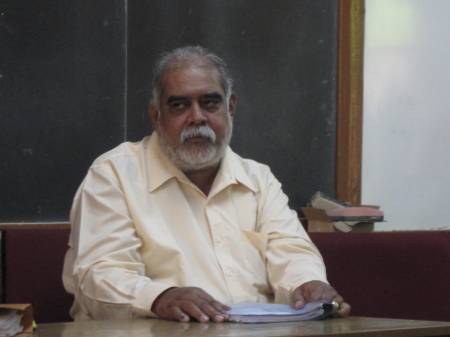 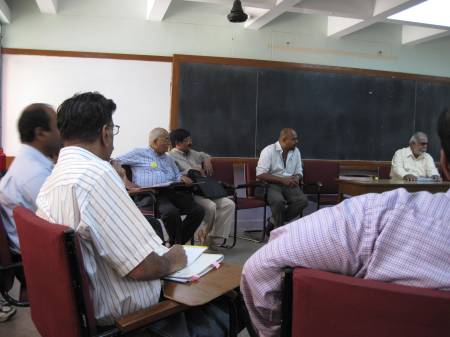 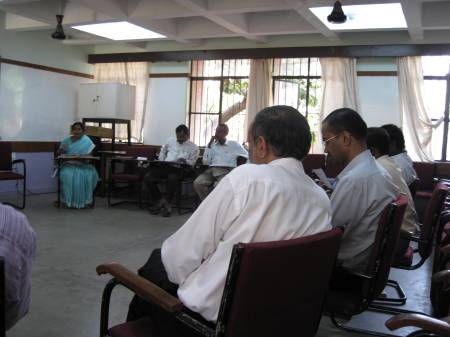 Eager participants  – a mix of individual activists and NGO staff from Karnataka and Tamil Nadu.

The RTI workshop, held yesterday from 11am – 3pm at the Indian Social Institute, was a timely opportunity for those working with the RTI Act in both Tamil Nadu and Karnataka, to come together and discuss their experiences, both positive and negative with the group.

It was a good chance to open dialogue on this important piece of legislation and discover the differences between the states and finding out how these differences affect how the Act is approached for maximum effectiveness.  For example, while Karnataka has several rules relating to the Act, Tamil Nadu has none or that hearings in Karnataka are open, while hearings in Tamil Nadu are completely closed.

Many thanks to Mr Ossie Fernandes for speaking at this key workshop. 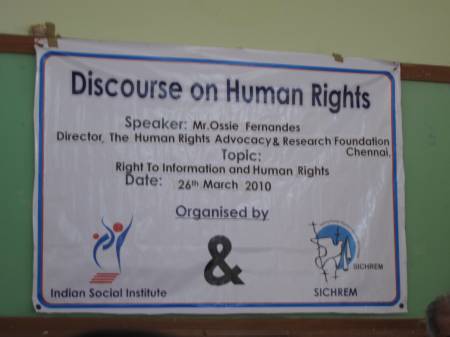 ISI and SICHREM hold monthly human rights discourses on the last Friday of each month – yesterday, the topic was Human Rights and the RTI Act, guest speaker Mr Ossie Fernandes, director of the Human Rights Advocacy and Research Foundation in Chennai. 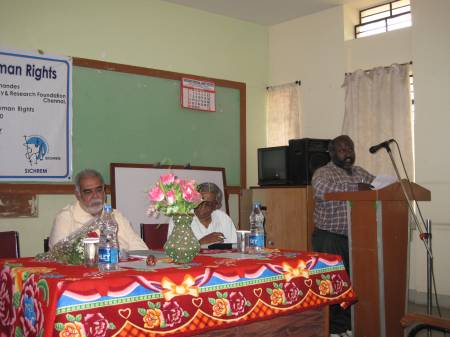 Mr Fernandes spoke to an attentive crowd of approximately 40 individuals  about why the RTI Act 1995 is such a radical piece of law – unlike other pieces of legislation which empower the State, the RTI Act disempowers the Government and empowers Indian citizens.  He also went on to explain how the Act is a lifeline for the poor and downtrodden and is an important tool for human rights defenders in India.

R.Manohar, Head of Programs at SICHREM, organises and participates in the Monthly RTI Clinic & Meeting at Cubbon Park, Bangalore held on the last Saturday of each month.

The clinic is from 2pm – 4 pm in Cubbon Park (opposite side of Press Club gate).  These monthly clinics are a chance for anyone to come and learn about the RTI Act, how to make an application and to share their experiences with the RTI Act.

Please do join us this afternoon.

The Tamil Nadu Right to Information Campaign (the Campaign) is working for the efficient and effective implementation of the RTI Act 2005 in Tamil Nadu. The Campaign has conducted several seminars, round table conferences, trainings, RTI clinics and camps across the state regarding the RTI Act. Every year the Campaign organises a 10 day awareness programme across Tamil Nadu together with more than 40+ organisations. So as to reach the marginalised and the workers, a wide range of resource materials including pamphlets, RTI Act Book, posters have been published by the Campaign which have been received as very useful material by various sections, including the Tamil Nadu Commission.

A team of eight (8) members of the Tamil Nadu Campaign have decided to meet and learn about the functioning and experience of the other State’s Information Commission’s regarding the implementation of RTI Act and are visiting Bangalore to meet individuals, organisations and the commission members involved in using and working with Karnataka RTI Act.

If you are interested, please send an mail confirming your participation for the discussion with details of  your:
1. Name
2.Individual / Organisation
2.Address
3.Contact details

SICHREM is searching for candidates for the post of “Manager – Accounts and Administration”.

For further details about the organisation, please visit our website.

Applications may be sent via e-mail to contact@sichrem.org, giving the contact details of at least two references.

Applications must be received by 25th March 2010.

Please pass on this information to anyone you know who may be interested in working for us.

Environment Support Group, an independent not-for-profit NGO concerned with a variety of environmental and social justice issues around India and based in Banashankari, Bangalore, hosted a three day workshop on “Environmental Governance in India” last week.

The catalyst for holding the workshop was for people to meet and collectively review the current environmental governance situations in India and consider what should be collective strategic actions to advance human rights and environmental and social justice. 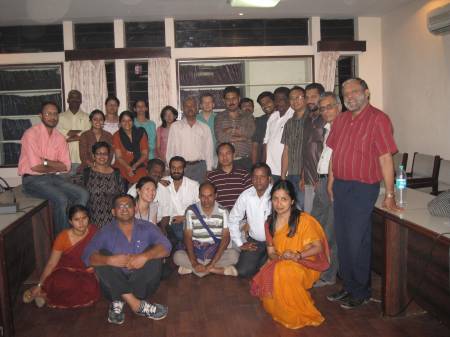 Group shot taken on the last day (unfortunately not everyone was able to make the full three days so this is not the full group of attendees).

One of the attendees, Rajesh Rangarajan, an environmental professional working at the Centre for Development Finance showed us his current project here – a pollution map which tracks environmental change by creating a repository on pollution monitoring to capture and disseminate data to civil society in a systematic and user-friendly manner.  Do check it out!

On Saturday 6 March, Mr Mathews Philip, Executive Director of SICHREM, gave a presentation about the principles of human rights at the Director General of Police, Corps of Detectives (COD), Karnataka office. 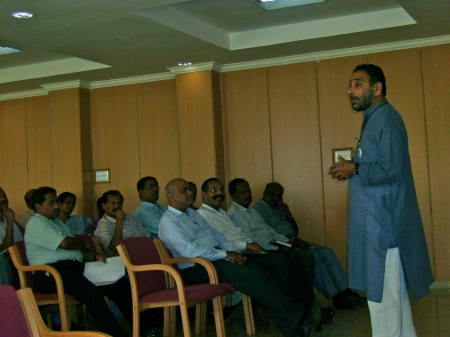 The audience, all inspectors, were engrossed by Mr Philips’ presentation and asked many questions. 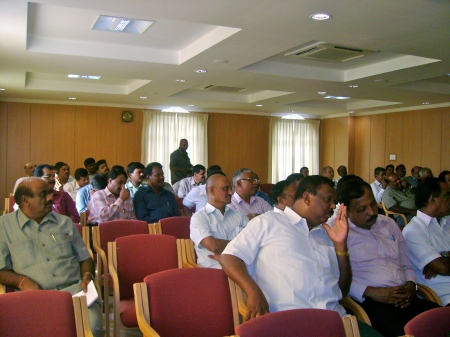